Protein, sugar, fat, vitamins, inorganic salts, and water are the six nutrients necessary for the human body. They play a vital role in people's life activities and are also the main considerations for people to make a reasonable diet. China used to be a country with plant food as its staple food. However, with the gradual improvement of people's living standards in recent years, people's eating habits have changed a lot. Following this, the incidence rate of obesity, diabetes, arteriosclerosis, coronary heart disease and malignant tumors has increased. These diseases are not only common in the elderly, but also in the young and middle-aged population, and even the incidence of adult diseases in children and young people has increased. Studies have found that excessive intake of fat and carbohydrates in food and insufficient intake of plant foods are important reasons for this phenomenon. Cellulose is more abundant in plant foods. Food cellulose includes crude fiber, semi-crude fiber and lignin. Food cellulose is a substance that cannot be digested and absorbed. It used to be considered "waste", but now it is believed to play an important role in protecting human health and extending life. Therefore, it is called the seventh nutrient of "Platinum". As a result, cellulose has attracted more and more people's attention, and has become the focus of many food researchers as well as the public.

1. The definition of dietary fiber 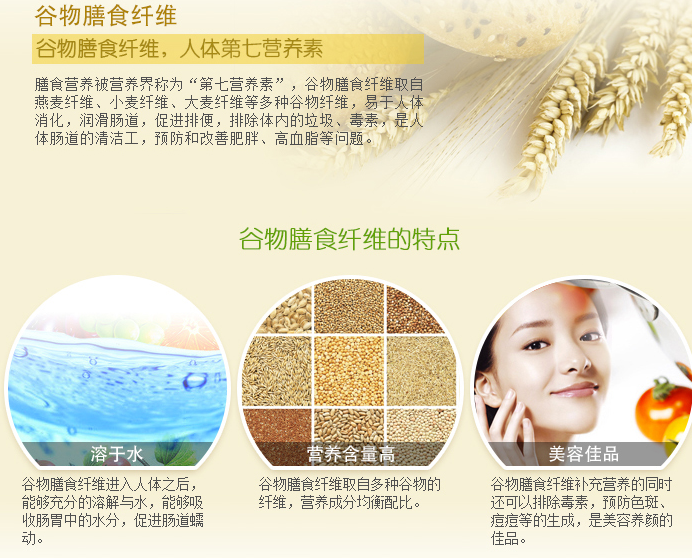 2. Classification of dietary fiber and foods which are rich in fiber

Insoluble fibers include cellulose, lignin and some semi-fibers, as well as wheat bran, corn bran, celery, peel and root vegetables from food. Cellulose has the function of retaining moisture and increasing stool size. Hemicellulose can reduce pressure in the colon. Lignin has anti-oxidant function and can combine with mineral elements (like iron, calcium and zinc, etc.).

Dietary fiber content of some foods (per 1,000 grams of food)

(2) According to different sources, dietary fiber can be divided into the following six categories

1. Cereal fiber. Mainly include wheat, oats, corn and rice bran fiber. Among them, oat fiber is recognized as the highest quality dietary fiber, which can significantly reduce the blood cholesterol content, thereby reducing the incidence of heart disease and stroke.

4. Vegetable fiber. There are many researches on beet dregs, carrot dregs, taro and Zizania latifolia fiber, as well as celery and other vegetable powder and vegetable juice.

5. Biochemical synthesis and conversion of fibers. It mainly includes modified cellulose, resistant dextrin, hydrolyzed guar gum, microcrystalline cellulose and polyglucose. It is the main application of fiber in food field.

6. Other dietary fiber. It mainly refers to fungal fiber, seaweed fiber and some mucilage and gum. In addition, there are some fibers contained in the seeds of fiber plants, such as edible fiber in flax meal. 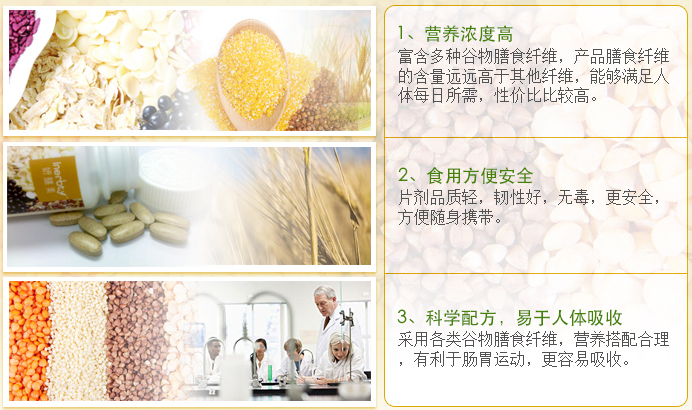 (2) Discharge toxins: The chemical structure of dietary fiber includes some carboxyl and carboxyl side chain genes, which act as a weakly acidic cation exchange resin. Moreover, there are many active genes on the surface of dietary fiber, which can chelate cholesterol, bile acid and some toxic chemicals. This function can eliminate the foreign harmful substances that invade the human body. When some environmental pollutants are ingested into the human body, dietary fiber can remove them. It has been reported that Cd and nitrite can be removed. The latest in vitro test found that wheat bran dietary fiber has the function of eliminating Pb, Cd, Hg and high concentrations of Zn and Cu, which can reduce their concentration from toxic levels to safe levels.

Soluble dietary fiber pectin and other molecules can form very sticky liquid in the digestive tract due to the different shape, size and spatial structure of the molecules. The mucus in the stomach delays the emptying of the stomach and contributes to the feeling of fullness; in the small intestine, the mucus hinders the mixing of digestive enzymes with the contents, slowing down the process of digestion and absorption. According to this function, some dietary fiber can be made into functional food for weight loss to meet the needs of obese patients and those who want to keep slim.

In recent years, the incidence rate of diabetes has increased year by year, especially in patients with type 2 diabetes. There were 30 million people in the world in 1985, 120 million in 2000, and it is expected to increase to 220 million in 2010 and 300 million in 2025. Soluble dietary fiber such as gum dietary fiber has a better effect on reducing diabetes. Studies have shown that dietary fiber can slow down the absorption of glucose by the small intestine in at least three ways: increasing the viscosity of intestinal juice and hindering the diffusion of glucose; reversibly adsorbing glucose and reducing the absorption of glucose in the intestine; affecting the degradation of starch by α-amylase, prolonging the enzymolysis time and reducing the release rate of glucose.

Hyperlipidemia is the basis of arteriosclerosis. Excessive intake of fatty substances in the body can cause hyperlipidemia. The absorbed cholesterol is converted into bile acid and excreted in the feces. It is generally believed that increasing the excretion of fecal bile is the main mechanism for dietary fiber to reduce blood lipids and cholesterol. Dietary fiber is fermented in the intestine to produce acetic acid and propionic acid, which inhibit the activity of carboxymethylglutaryl-CoA reductase (HMG-CoA). This enzyme is the rate-limiting enzyme for cholesterol synthesis. Water-soluble dietary fiber has a significant effect on lowering cholesterol. The water-soluble fiber in pectin, guar gum, and oat bran all have a good effect on lowering blood lipids.

(4) Reduce the incidence rate of dental caries: the main cause of dental caries is caused by S.mutans. A large number of studies have shown that S.mutans produced glucose transferase, which can not decompose oligosaccharides into monosaccharides such as glucose, fructose, galactose, and so on. Moreover, the amount of lactic acid produced by S.mutans from Isomaltooligosaccharides is also significantly less than that produced by sucrose and lactose, so Isomaltooligosaccharide is a kind of Low caries sugar. Soy oligosaccharides cannot be used as a suitable substrate for oral microbial metabolism. Therefore, it will not cause tooth decay, and is especially suitable for children.

(5) Prevention of colon cancer: in the case of long-term constipation or high-fat diet, some carcinogens or promoters (nitrosamines, phenol, indoles, secondary bile acids, estrogen, etc.) are often formed in the large intestine of the human body. Among them, bile acids are used as promoters of colon cancer. Food fiber can combine with bile acid, reduce its absorption, and make the harmful factors of large intestine hard to contact with the upper intestine. In addition, the moisture content of food fiber makes feces soften, which also reduces the friction damage with intestinal wall in the process of subsequent delivery, as well as reduces the chance of canceration. In addition, the colon bacteria that can ferment fibers produce acid. It is currently believed that butyric acid may have the potential to prevent colon cancer. The reason is that colon cells absorb butyric acid quickly and have specificity. And Butyric acid, as a metabolic energy of colon cells, can promote the proliferation of normal cells. What’s more, Butyric acid can also inhibit the growth and proliferation of tumor cells and control the expression of cancer-causing genes.

In addition to the above functions, some dietary fibers have antioxidant capacity. This function and free radical scavenging activity may be related to human aging. In some literatures, the lack and deficiency of dietary fiber also have a great relationship with the incidence rate of gallstones, kidney stones, bladder stones, appendicitis, ulcerative colitis, duodenal ulcer, intermittent hernia and so on.

The balanced diet pagoda is divided into five layers, including the main types of food we should eat every day. Cereal is at the bottom of the list, and everyone should eat 300-500 grams a day. Vegetables and fruits occupy the second layer, and each person should eat 400-500 grams and 100-200 grams a day. Fish, poultry, meat, eggs and other animal food is located in the third layer, each person should eat 125-200 grams per day (fish and shrimp 50g, livestock and poultry meat 50-100g, eggs 25-50g). Milk and legumes together account for the fourth layer, and each person should eat 100 grams of milk and dairy products as well as 50 grams of beans and bean products every day. The fifth layer (the top of the tower) is fat food, and the daily intake cannot exceed 25 grams.

From the dietary balance pagoda, we can see that the cereals, vegetables, and fruits in dietary fiber are at the bottom and the demand is the most. It can be seen that dietary fiber is necessary and extremely important to the human body. So how to consume dietary fiber is reasonable, and who should not consume too much dietary fiber? Since the carboxyl group in the dietary fiber chemical structure can absorb cations and reduce mineral elements, excessive intake also interferes with the absorption of other nutrients and has certain anti-nutrition properties. Therefore, a reasonable intake of dietary fiber is extremely necessary for human health. The American Cancer Institute recommends that each person should take 2-3 grams of dietary fiber per day. The Chinese Nutrition Society has issued a reference intake of dietary nutrients for Chinese residents. The daily dietary fiber content is about 3 grams. The standard recommended by the World Health Organization is that the average daily intake of cellulose is 1-2 grams. Experts believe that the average adult should consume 2-3 grams a day, 3-4 grams to maintain normal bowel movements and prevent constipation.

Although high cellulose food can prevent the occurrence of obesity, help obese patients reduce energy absorption and control blood glucose level. However, eating too much cellulose may also lead to some salt free and fat-soluble vitamins in the body. In particular, patients with the following diseases should not eat high cellulose food: ① patients with severe esophageal and gastric diseases, such as esophagitis, gastritis, gastric ulcer accompanied by bleeding; ② patients with chronic diarrhea, chronic enteritis, intestinal adhesion; ③ patients before and after intestinal surgery. After eating too much food fiber, the above symptoms may be aggravated.

Dietary fiber is widely used in food because of its excellent physiological function and unique biochemical characteristics. At the same time, more and more attention has been paid by food science and technology workers. With the in-depth study of it by scientific researchers, its mechanism of action will be more clear, and more and more functional products for different diseases will be developed and produced to better serve human health.